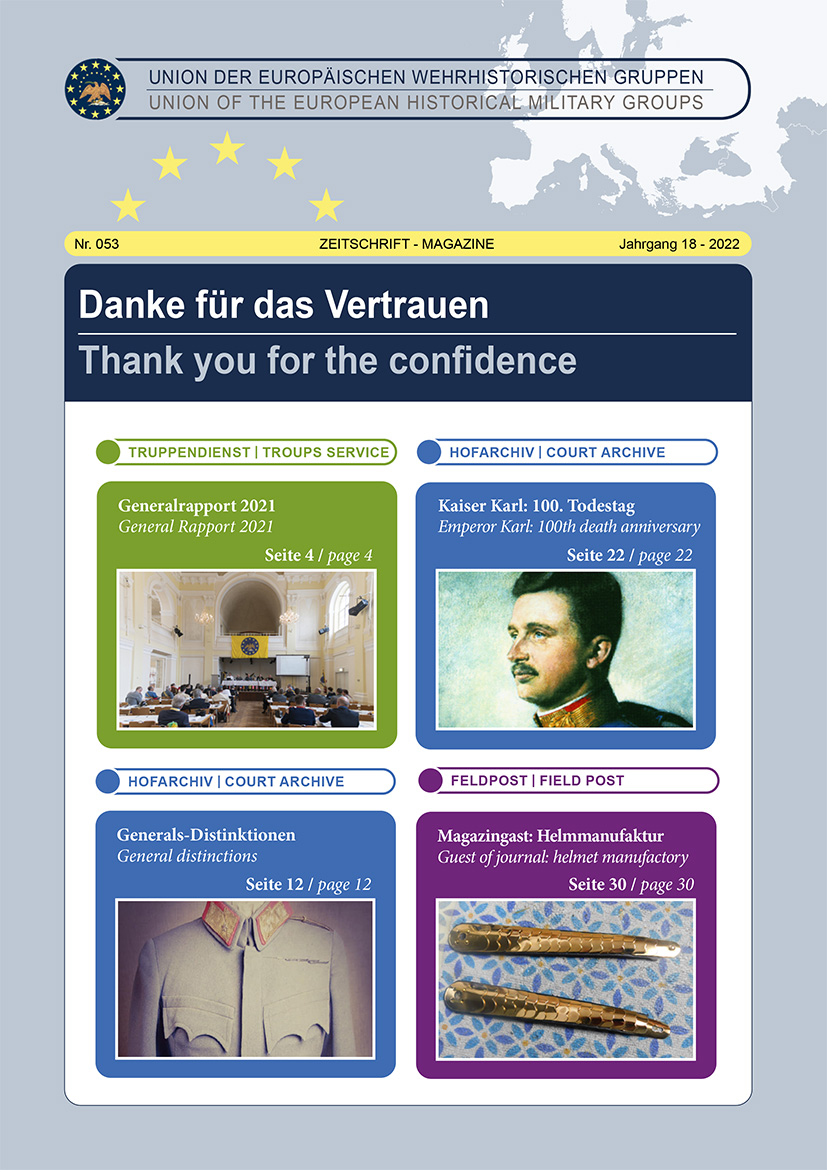 The parade marched at 2 p.m. from Martin Luther Platz across Landstraße, lined with a line of spectators, to the main square. Here then was the usual military procedure. (report, national anthem, pacing the front, salute, state anthem, etc.)

Besides the insignia troop of the HUAk Enns, 280 uniforms from Slovenia, Croatia, the Czech Republic, Poland, Hungary, Germany and from almost all provinces of Austria came.

For the first time at the parade were also the “Krizevacka Djevojacka Straza” (Kreuzer Girls Guard – an all-women detachment), the “Kostelska pistola – Kegleviceva straza Kostel” (Keglevic Guard Kostel/Grauenwarth) both from Croatia, the rifle club from the town of Stribro (Czech Republic) and the Polish Volunteer Legion.

Mjr iTR Alexander Sascha Eckhardt, MBA, was in command of the troops deployed.

The intercessions were said in Croatian, Slovenian, Polish, Czech and German.

At around 2.35 p.m., the regimental chaplain of the DR7, Samuel Josef Ebner, celebrated the service of the word.

Afterwards, the DR7 command asked for a reception at the Old Town Hall.

On the occasion of the 100th anniversary of the death of Blessed Emperor Karl I. on 1 April, commemorative events took place all over the world, first and foremost, of course, in Madeira, where the last Austrian Emperor died in exile.

The UEHMG – represented by its President MajGen iTR Michael Blaha, MSc, took part in the commemorative mass of the Order of St. George in the Salesian Sisters Church in Vienna on 1 April, which was also complemented by lectures on the topic. Delegations from the Dragoon Regiment 2 and the Dragoon Regiment 7 as well as some other Board members were also present.

On 2 April – in the presence of President MajGen iTR Michael Blaha, MSc and Deputy President Lieutenant Colonel iTR Michael Joannidis – a short service was held in a small setting at the Kaiser Karl Chapel in Biedermannsdorf. The chapel itself is a purely private initiative and built with our own funds.

Last but not least, a commemorative mass took place on 3 April in St. Pölten, where the UEHMG had already supported the installation of relics two years ago. President MajGen iTR Michael Blaha, MSc followed by the delegation of the Hussar Regiment 5 under the leadership of the Secretary General Colonel iTR KR Ernst Kugler were allowed to represent the UEHMG.

All three events showed the close connection to the blessed Emperor Karl and were carried out with great dignity. Below are a few impressions of the events.

On December 24th the traditional Christmas ride was carried out by the Dragoon Regiment 2 Nikolaus Graf Pejacsevich with the delivery of the “Light of Bethlehem”.

On November 14, 2021, the Austrian Cavalry Association was allowed to be a guest at the residence of the Order of St. George in Vienna and hold its autumn conference there. The theme of the conference was the “Pan-European Movement”, presented by its Secretary General Rainhard Kloucek.

The welcome was given by the procurator of the Order of St. George, Baron Vinzenz von Stimpfl-Abele. In his words, he emphasized the solidarity with the Austrian Cavalry Association, which shows itself through the preservation of tradition and through the symbol of St. George. “Connectedness” is also what distinguishes the House of Habsburg, which places what is common above what divides and connects different nations.

The President of the Cavalry Association Colonel Franz Prandstätter was pleased about the presence of the President of the UEHMG, Major General iTR Michael Blaha, MSc, and in his welcoming words he discussed the importance of maintaining tradition, which not only includes wearing a uniform, but also dealing with the history and clinging to it with dignity and respect. The autumn conference should contribute to deepening this knowledge.

Secretary General Kloucek also opened his lecture on the Pan-European Movement with reference to the tradition that forms our roots – we shouldn’t “put everything away” right away.

The Pan-Europa movement was launched on November 17, 1922 by Japanese-born Richard Coudenhove-Kalergi, who saw Europe as a whole. He advocated a European order, especially externally, regarding security policy and the free internal market, and even then the idea of a common currency (based on the gold standard) was born.

In 1926 he organized a congress which was attended by over 2,000 people and in which the idea of a united, peaceful Europe was promoted. The movement was banned by the emergence of National Socialism – Richard Coudenhove-Kalergi fled to Pressburg, then to the USA. The unification of the European nation-states initially failed because of the erection of the Iron Curtain.

After 1945 there was a major congress in The Hague, in which the idea of European integration was revived. The movement was continued by Archduke Otto von Habsburg, who became Vice President of the Paneuropean Union in 1957. During his presidency, the first opening of the Iron Curtain on August 19, 1989 on the Austro-Hungarian border became legendary, when the first citizens of the East were able to cross the border into Western Europe under the co-organization of the Paneuropean movement.

In earlier alliances of states, such as the EEC and EFTA, the European idea was only partially reflected, and in today’s European Council a single country often prevents an agreement. With the focus on expanding to Southern / Eastern Europe, the Pan-European Movement is still pursuing the idea of a united Europe and will celebrate its 100th anniversary on November 17, 2022.

After a short discussion, Colonel Franz Prandstätter pointed out further celebrations for the coming year:

Then Mjr. iTR Mag. Georg Reichlin-Meldegg presented his book “Stormed Fortress. War and Love in Times of Cholera and Typhus ”.

The commander of Dragoon Regiment 2, Obstlt.Michael Islinger, then informed about an event that is also planned for the coming year:

350 years of the establishment of the regiment – an exhibition on Heldenberg about dragoons, lancers and hussars regiments since 1672. Approx. 80,000-250,000 spectators are expected for the exhibition planned from April to November 2022. He asks for loans.

The autumn conference 2021 ended with a leisurely lunch in a nearby restaurant. 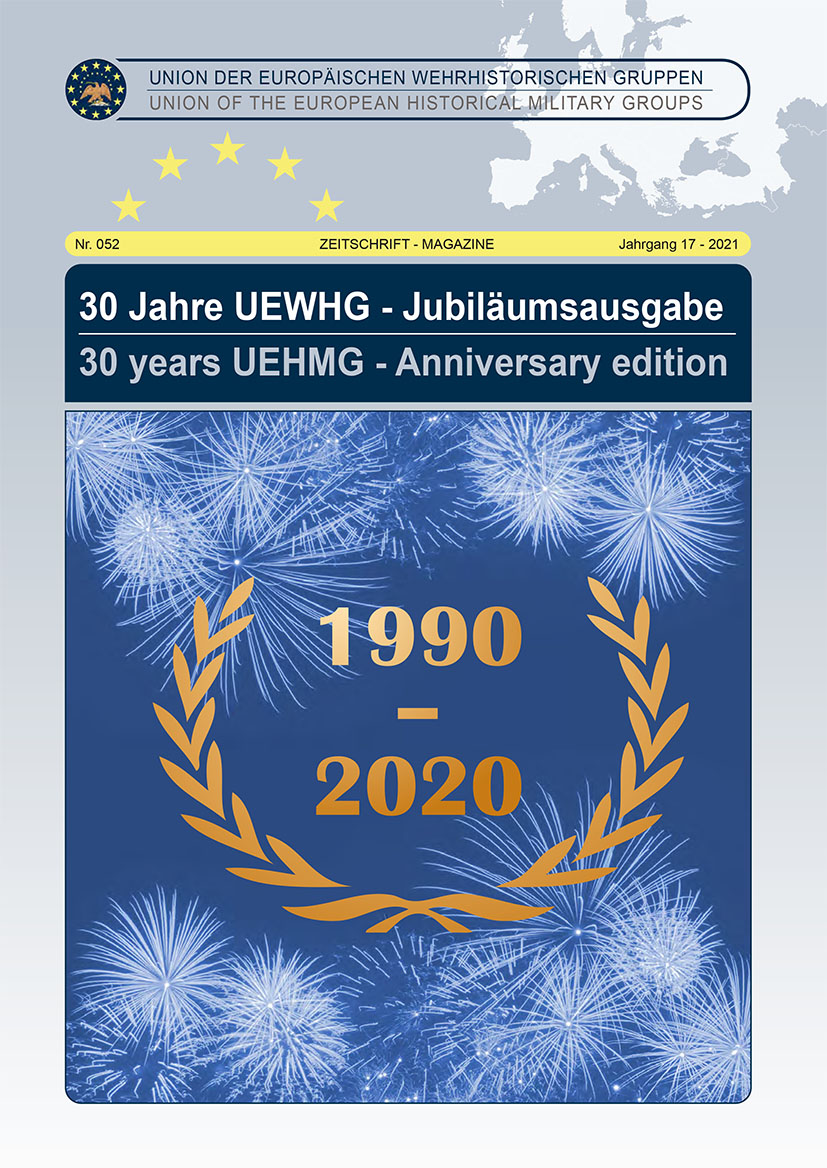 With great sadness we have the duty to announce that our comrade Major iTR Alois Gründler, regimental commander of Kaiserjäger Schwaz fell asleep peacefully on September 20, 2021 within his family circle and passed away.

The President of the Union of European Historical Military Groups, Major General iTR Michael Blaha, the Board, the Presidium and all comrades of the UEHMG express their deep sympathy to the bereaved for this heavy loss.

The UEHMG will keep an honorable memory of its well-deserved comrade.

From September 17 to 18, 2021 – after the event was unfortunately canceled in 2020 – the General Rapport 2021 took place in Korneuburg/Austria. President GenMjr iTR Michael Blaha, Msc, organized the program almost single-handedly due to the ongoing restrictions caused by the Corona situation and prepared the general assembly with the election of the board.

On Thursday evening an illustrious group met in the wine bar “Das Herzog Leopold” and celebrated the long-awaited reunion with one or the other fine glass of wine – after all, the last big event was the General Rapport 2019 in Sopron and for some just before the lockdown the Kaiserball 2020.

On Friday, the general assembly of the UEWHG with the reporting years 2019 and 2020 was on the agenda. The historic city hall in Korneuburg, which provided a dignified ambience, acted as the meeting place. In his activity report, the president mentioned the joint achievements of the board in the past 4 years: the own events, the numerous board meetings, the redesign of the website and the journal, the increase in members and the positive financial situation. But he also went further into the future challenges: the positioning as an umbrella organization, the topic of women in uniform, the demarcation between maintaining tradition and representation and the further increase in internal communication.

After the reports of the vice-presidents, the liaison officers and the other board members, the actions of the financial officers and the executive committee were unanimously approved – thanks and respect to all function holders for the performance of the past term of work! The opportunity was also used to express thanks to some well-deserved functionaries and to raise them to the status of honorary members – this concerns Major General iTR Peter Pritz, Colonel d. Kav. Friedrich Gappmayr, Lieutenant Colonel iTR Hans Härtl, Lieutenant Colonel d. Kav. Michael Islinger and Lieutenant Colonel iTR Uto Ziehn, who have all done an excellent job in the interests of and for the benefit of the UEHMG.

After a leisurely coffee break, the main topic was the election of the new board. President GenMjr iTR Michael Blaha, Msc, was unanimously re-elected, as was his Austrian Deputy Lieutenant Colonel iTR Michael Joannidis in the newly created position and the four Vice Presidents Colonel iTR Hans-Joachim Böhm, Colonel iTR Dipl.Ing. Stancho Djumaliev, Lieutenant Colonel iTR Pål Robin Gule and Lieutenant iTR Nataša Salihović. In the area of administration, there is a new team, some of them new but experienced in tradition, in the form of Secretary-General Colonel iTR KommRat Ernst Kugler, Administration Officer Captain iTR Franz Schlosser, Financial Officer Financial Councillor iTR Frank Kasteliz and Media Officer Cadet Sergeant iTR Andreas Tarbuk. We can welcome Major iTR Alexander Eckhardt as adjutant. All other functions of the board of auditors, the board of justice, the liaison officers and honorary members can be found here on our website under UEHMG/Executive Committee.

With an evening together with an excellent grill buffet in the “Gwölb” restaurant in Korneuburg, the amicable day ended with a friendly atmosphere – a get-together that was obviously good for everyone after the long separation.

Saturday was marked by the 30th anniversary of the UEHMG. First, however, the supporting program started – an impressive visit to the Korneuburg eagle observatory with a show of birds of prey on the one hand and traditional shooting with orderly rifles at the HSV Vienna in Stammersdorf on the other. Shortly before the ceremony, a thunderstorm swept over the region, but the sun was favorable to the uniformed men and displaced the rain clouds in time for the march-in.

In his speech, President GenMjr iTR Michael Blaha, Msc, once again addressed the importance and sustainability of the Europe-wide umbrella organization of the UEHMG and thanked not only the representatives present for their participation, but also all previous officials over the past 30 years. In an anniversary publication, which contains many greetings from high-ranking personalities, the development of the UEHMG and its current status was presented in detail and can be read here on the website under Archive/Magazines.

The ceremony was also used for a number of awards – for example, the transfer of command and promotions to Dragoon Regiment 2, the handover of the sub auspiciis seal of the House of Habsburg to the Carinthian traditional gendarmerie and the handing over of merit to the Karlovac City Guard. After the handover of commemorative medals and banners – sponsored by the President himself – the ceremony ended with a triple cannon shot by the RAD2 and a parade of all uniformed men in front of the guests and guests of honor. All in all, a worthy and appropriate anniversary celebration that everyone will remember for a long time.

Saturday also ended with a cozy, comradely finale in the “Gwölb” restaurant, where it was noticeable that no one would like to leave and go home. In any case, we are already looking forward to the General Rapport 2022 in Schwaz in Tyrol!

> Here you can find impressions of the two days.

Here you can find impressions of the meeting, the supporting program and the ceremony for the 30th anniversary on September 17 and 18, 2021 in Korneuburg.

> Here you can find a detailed report.

Meeting of the General Rapport

Ceremony for the 30th anniversary

We allow ourselves to publish the contributions of our comrade LschKpt iTR Georg Schaller. It is a series about Old Austria – the contributions are created in any order and can be gradually put together to form an overall document.

The documents are all written in German.